After four years of coaching the Olympic freestyle snowboard team Bud Keene has decided to step down and return to his roots and his family in Stowe, Vermont. Keene will take over the freestyle program for both snowboarding and skiing at the Mount Mansfield Ski and Snowboard Club in Stowe. He officially ends his tenure with the U.S. team on May 1, and looks forward to being home with his family. He is the one who started the snowboard program there in 1989.

I should have snapped his photo when I ran into him at Cherrybone Snowboard Shop in Stowe right after the 2006 US Open.

Btw, the MMSSC loves to dance. At least the guys from the club who were riding in the NYC Rail Jam in Time’s Square in March do. They can’t help but get down when they hear Sean Paul’s “Temperature.”. And they’re fans of Natasha Betteridge too. (Or was it Natalie Imbruglia? You can’t always remember things you hear at the top of the halfpipe.) Shout out to Mike Slaughter and Dave, their coaches.

Amen Teter has left his post at Palmer Snowboards to manage his kin – Hannah, Abe, and Elijah who all have their eyes on the prize of the US Olympic Team. Hannah is already a solid member of the 2006 Olympic “A” team. Abe figures this is his last shot at the Olympics.

Trevor Andrew (Burton) has a new band and a new girlfriend. He is frontman for his band “Trouble” which is playing on the Burton Tour. He’s dating Santi White, beautiful singer for the band “Stiffed”, also on the tour. Perfect match!
Visit Trevor’s site at http://www.trevorandrew.com/ and you’ll see that there’s been no slacking off while his ACL heals. His “Wasted Youth” outtake trailer is particularly amusing.

I heard that DCP and Megan Pischke have tied the knot of marriage.
Good luck to you!

Jeremy Jones (Rossignol) and his wife Tiffany have a beautiful baby girl, born on the Summer Solstice.
By the way, Tiffany is a dynamic real estate agent in the Lake Tahoe area, at Prudential CA Realty. So call her if you’re looking in that market. (email me for contact info)

Hi my names Jason and I live in the UK, and I am a snowboarder.
I am a massive fan of Todd Richards, basically he is my snowboarding hero. I have had a read of your article on your website (dated last year I no), that he has left Rossingnol snowboards. I was wondering if you no what snowboarding team he has moved to?

Thanks so much for your help Jason.

Todd Richards has only made one big contest appearance as of yet for this year. (04/05 season)   This event was the X-games Slopestyle event in which he showed up with a blank snowboard.   The board was completely white on the topsheet and base, the only logos were that of his current sponsors.

There was an Audi sticker on the topsheet of his board at the X-games but there is no real verification that he is riding for them.   But I know that he is an Audi fanatic which you can also read about in his book P3: Pipes, Parks, and Powder.

As for his board sponsor nothing has leaked out in the way of news.   He still seems to be a free agent.   But you can be sure that come this fall you will be able to buy his pro model board from what ever company he chooses to sign with.

We had fun at the Burton and Rossignol parties in NY recently. Photos of both can be found at http://www.snowboardsecrets.com/Articles/articles.htm

Here’s what we found out at the parties:

Hannah Teter is looking forward to her first competition of the season that will be in Saas-Fee, Switzerland. I can’t help saying this – she is adorable – both looks and personality. She’s going to have a dynamite season. (photos of Hannah and me at http://www.snowboardsecrets.com/Articles/04Burton_Tour_NY.htm

Saw Pro-Rider Megan Pischke – one of my coaches at Barrett Christy’s Snowboard Camp in Vail last winter. She and DCP (David Carrier Porcheron – Burton Team) got engaged a few months ago after dating for a few years. They look happy. Check it out at http://www.snowboardsecrets.com/Articles/04Burton_Tour_NY.htm

Btw, Barrett Christy gave birth to a healthy big baby boy in Oct. and is doing fine. She’ll be up and ready for this season’s camp at Vail. Congrats Barrett! 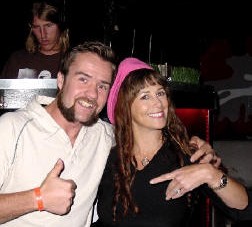 Team Rider JF Pelchat and I reminisced about how he streaked naked across the outdoor ice rink in Les Deux Alpes France at Rossignol Camp in Summer of 2003 when I attended. J.F. stands for “Jean Francois” but he switched to JF when he was a kid. He says “it’s more to the point.”  Click here to see photos.

Jeremy Jones’ part in The new Rossignol video Projectour had the audience emoting out loud in awe and disbelief, when they showed the film at the party. I held my breath seeing that mini-avalanche come down around him. But he was right in the room watching the vid with us, safe and sound. Photos.

When asked, he said he doesn’t think that’s even his very best movie shot. Hard to imagine. Will try to find out what he considers the best and pass it along to you. His board set-up for that kind of riding is a 21″ stance, regular. Back foot minus 3, front foot 17. (Editor’s note: Jeremy Jones says that “Notice to Appear” is the video with his fave part that he’s done in it.)

Some people haven’t quite figured out that there are 2 pros named Jeremy Jones and are confused to find that Jeremy Jones rides for Rossignol AND Burton, and specializes in backcountry mountain chutes AND park rails. And lives in Lake Tahoe AND Salt Lake City. Now you know the scoop. When you see a film advertised with Jeremy Jones in it, and it has logos from both Burton and Rossi, you never know which guy is actually in it until you watch.

Todd Richards – Olympic snowboarder and tall skate ace has not returned to the Rossignol team this season after being part of it since 2000. Team Manager Patryck Bernier says Ross is looking for more money than Rossi offered. Btw Todd was born in the same hospital as me in MA.

And pro Victoria Jealouse has the same October birthdate as me. Wish I could ride like her!